Apple Arcade launched a couple of months ago and it has completely changed iPhone and iPad gaming. The gaming subscription is available on the iPhone, iPad, Apple TV and also on Macs. Apple Arcade costs $5 per month and it gives subscribers access to hundreds of amazing games that will make it seem like time is flying by! To make things even better, Apple Arcade has a handful of exclusive titles that you will not be able to find anywhere else.

When it comes to mobile games, there is nothing else than can get players excited than multiplayer titles. You can team up with your friends in this type of games and take on challenging opponents in order to find out who is more skilled. If you are not sure what multiplayer Apple Arcade game to play with your friends, then you are in luck! Today we are going to check out the 5 best multiplayer games on Apple Arcade. 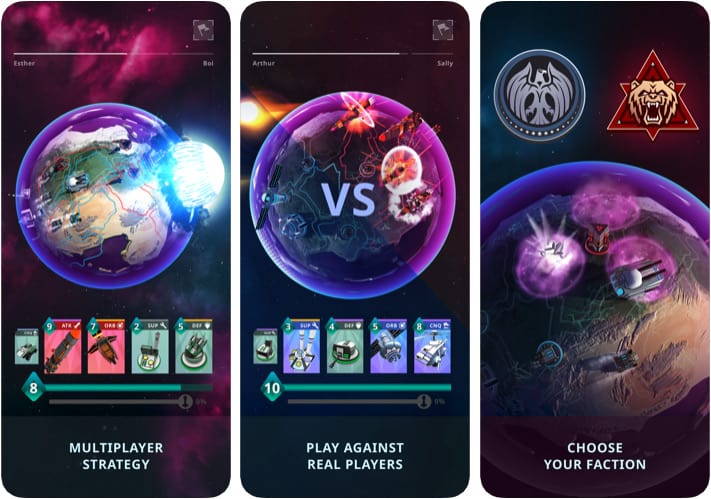 What better way to start off other than with a game that gives players the chance to live out their childhood dreams of being the commander of a massive starship? Stellar Commanders is one of the most downloaded games featured on Apple Arcade and this speaks volumes about the performances and features that the game has to offer.

The cool thing about Stellar Commanders is that players have seven minutes in which they need to demolish their opponents and collapse entire planets. The time limit is great because it pushes players to come up with innovative strategies that give them the upper hand. In addition, players can pick and choose from various troops that have unique skills.

Who doesn’t love cats? Even though Cat Quest II may sound like a silly game for kids, we assure you that it’s much more than that. This is an action-fantasy RPG that is cat-themed. What makes this game stand out is the fact that it gives players access to an immersive game world and interesting story that will keep them hooked and asking for more.

The most interesting features that Cat Quest II offers are magical powers. As players keep leveling and discovering new zones, they will also discover magical powers. Acquiring all the possible magical possible available in Cat Quest II is a “must” for all players who want to have an advantage over their opponents. Since this is a next-gen game, then it should come as no surprise that Cat Quest II requires a minimum of iOS 13 and 650MB of free internal storage space in order to run at peak performance levels.

Do you remember how back in the day you would use to play a game called “The floor is lava” with your friends? Well, a couple of iOS developers have remembered just how fun the game used to be and they have decided to create an iPhone and iPad version of it. The game is called Hot Lava and it is based on the childhood imagination game that gave millions of kids from all over the world moments of excitement and adrenaline rushes while jumping from one couch to another.

Hot Lava is a multiplayer game and this means that you can invite all your friends and compete against each other to see who can get the highest score. Hot Lava is a fun game that will challenge your mind to come up with solutions for difficult puzzles and to find ways around hot molten lava.

Nintendo’s Mario Kart Tour has been topping the “most downloaded” charts on both iOS and Android app stores. Apple is aware of that and this is why it has created Sonic Racing which is a multiplayer game that is featured on the Apple Arcade. Just like in Mario Kart Tour, Sonic Racing player will race against their friends and they can collect various power-ups that will help them set traps for their opponents.

If you are a fan of old cartoons, then you should be pleased to find out that Sonic Racing features a total of 15 characters that you can pick from before the race starts. To make things even better, each of the 15 characters has unique abilities. Our advice is to try top and combine your character’s abilities with the ones of your friends so that you can dominate the race. We also want to mention that Sonic Racing requires a minimum version of iOS 13 in order to run without any problems. In addition, the game weighs in at 1GB.

We are going to end our list with Spidersaurs, which in our opinion, is one of the multiplayer games made for iPhones and iPads. The game is developed by WayForward Technology and it is based on the highly popular classic game “Contra”. Although, Spidersaurs features much more amazing graphics in comparison with Contra.

Even though the highlight of Spidersaurs‘s gameplay is the gunplay and abilities that are enabled only via teamwork, the game also has an amazing story. The story of Spidersaurs revolves around two heroes who are determined to save the world form an eight-legged creature.

These have been our top five multiplayer games that are available on the Apple Arcade. We hope that you like them and if you have an Apple Arcade subscription, then you might as well give them a try. Who knows, maybe one of them will be your new main game. If you are looking for other fun games, then you might want to check out our top five fighting games for iPhone and iPad.