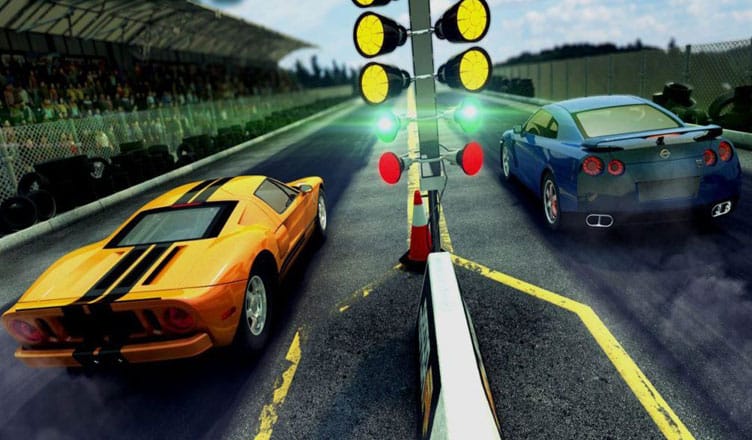 VR racing games actually give you a kick while you are playing these games sitting in your couch. Chris McCormack once quoted, “Fact One: Races are won or lost in key moments. Fact Two: Success in the sport is, above all else, about enduring suffering.” The car racing has always fascinated all of us: whether we are watching on television or playing it on video games or play stations.

The risks, the speed of car, type of car are the elements which would boil the blood and will follow in your dreams if you are lover of the racing games. There are games which will give you thrilling experience on your VR headset for iPhone 7 or VR headset for Galaxy S7.

Nowadays, with the emerging technology many games have come up but only few give us that enthralling experience. There are different types of racing games which include realistic racing game, space themed games, go-kart racing.

Racing games are best played in VR racing simulator. There are many such simulators available on the market; however two brands have carved a niche in this market. People are crazy about Oculus Rift racing simulator and Vive racing games. The latter is from HTC and you can grab that at an expensive price.

The games we have listed below support both simulators; but still you can check Oculus Rift racing games and virtual reality racing game Vive by reading the specifications.

Rather than discussing, let’s discuss the availability and type of VR racing games which you will love and is full of entertainment. Let us have a look.

It is termed as one of the best Racing Games for VR where the player has to compete within the time frame. The game consists of 17 cars, 36 stages and range is 4 to 16 km covering the locations: Monte Carlo, Powys and Argolis.

In addition to this, three more locations have been added to the game now along with the rally cross and player VS player mode. The player has to handle the car on and off in different weather conditions.

It is one of the realistic games which will help the player to explore various other aspects of the car and with each clearance of the stages, the other stage will get unlock. So get ready to experience this thrilling game.

Redout is based on the games like F-Zero, Wipeout, Rollcage etc. which boast wonderful graphics and thrilling speed. What is better than to have such experience altogether in the VR? It is the fastest game ever made.

This multi-player game can be played by up to 12 people, who can challenge each other. It is based on 7 types of event that include classic race to innovative-arena race and score based endurance.

There are about 25 tracks within 5 locations. With this game, you can create your own story by turning to different driving approach and 6 racing teams. The music of the game is dynamic and gives you the real feel of race.

Project Cars allows you to pick up your choice of car from a fleet of 75 cars. This is one of the best racing games that can bind its players with excellent sound quality. A player has to choose from the different weather conditions.

The game is all about power packed action; so if you are a diehard fan of racing, then Project Cars could be one of the games you wanted. It also gives you white-knuckle excitement with that of hours of game play and makes your weekend super amazing.

Imagine a situation: the world has ended and no humans are left. The only creatures left are robots and how they lead the racing is all about and dealing with the landscapes. Thick Air offers you various race modes with that of physics-driven flight model.

The game is inspired by automobile era of late 20th century. It has wonderful soundtrack; in the game, you can challenge your friend as it has split-screen multiplayer mode. The game is all about controlling the motions. Since it is a drone racing game, player needs to be extra cautious to play this difficult but entertaining game.

Are you a fan of Mario Kart? Then this game is perfect match for you. It is the first kart racer for the gear VR. Just explore the world by challenging your friends and racing against them. The beauty of this game lies in its wonderful locations, power-ups and many weapons to unlock.

This game is the perfect partner if you are doing family trip. Amazing graphics of this game will surely mesmerize people of all age group. Here in the game, you can choose the kart and travel. Like Mario Kart, this VR Karts also gives you weapons and power-ups. The fun game is really simple when played and VR gives it bonanza.

Have you imagined what if you get a chance to race track in spaceship? This game takes you directly to race the spaceship. The game has both single player as well as multi-player mode. It has nine different tracks, with different sections and jumps. From the 7 different spaceships, you will be getting upgraded as soon as you clear and unlock the stage.

The player needs to avoid red gates as these will slow the ship. There are twenty background music tracks, which are played throughout the game. The anti-gravity tracks will move 360 degrees around. The only loophole: every stage has the same theme.

Space Ribbon allows you to test your driving skill in galaxy. The rockets or space cars are not there but one needs to play the same game in space. You can play single handedly or can race along with your friends with 4 player split-screen.

The game is amazing and has been appreciated by people. The game is set in future and this concept would excite players of all age. While talking about the sounds and graphics they are just marvelous. It also uses flying Panda or Tiger as a way to keep the tracks on the space. The amazing game is what you desire for at such affordable rates.

If you are combative in nature, Faceted Flight is designed for you with stunt fight. The gamer just has to take the control on Hover Het and has to challenge ghost racer in ring. Just attack or relax, explore the free flight, jump on the cockpit and give target practice a try. It’s one of the fun games that provide amazing landscapes while flying. You can fly your plane in every possible manner. Faceted Flight lets you control your stunt plane easily.

The Driveclub VR game has many courses and cars, which can be played by a single player or by multiple players. With about 80 cars and more than 100 tracks, this game allows players to compete in different locations. Once the player clears the stage, another stage gets unlocked and you will get boost up with another stage.

The game also has weather change in form of rain and snow which gives more realistic view. In the game, there are basically 3 main game modes: tour, single event and multi player, where players can compete with each other.

The fantabulous game has amazing graphics, good cars along with many missions and cars. The game is all about racing on the street at night. You can choose the car and race, faster than the other player.

In this game, there are 12 tracks spread across 4 locations. As soon as you win the stages, you get the boost up as the fast racer. You also get various tasks assigned, which you need to do to win against competitors on tracks. Earn rewards while winning the races.

After winning, unlock the stage and you can buy different cars and flaunt them. Zoom the cars, upgrade them and also repair them and start the game with the speed and limit.

If racing is all you think about then iRacing is for you. This motorsports racing game requires membership to enter the newest form of competition. This game is available for PC, Windows and Linux based as well as Mac.

iRacing consists of all the cars which you want. The player just needs to plug into USB port and the internet connection. It has more than 100 cars and tracks on which you can experience the best features of iRacing.

The game is easy and gives you the freedom to set your own tournament and challenge other players. So join the 800 leagues and enjoy driving 100 cars.

This is a new game for racing stimulator. It possesses Direct X 11 graphics design. This game was designed from ground up with racing adherent. It is fun and realistic stimulator. The player gets more than 60 cars and several tracks to race in the game. The player can choose from the modes he wants to play.

The player gets access to on-board and track camera modes, exposure and saturation. It also offers the player to replay and that can also be saved. The player can play from small cup to F1 races in championships. The multiplayer mode will allow online race as well as LAN sessions. So experience the best game at this price.

Apart from above listed games, you can also explore some VR apps and VR games to entertain your strained nerves. Experience the thrill with this amazing racing Games for VR. Do share your views on Facebook, Twitter and Google Plus. Which product do you think is the best? Your opinion would be valuable to us.