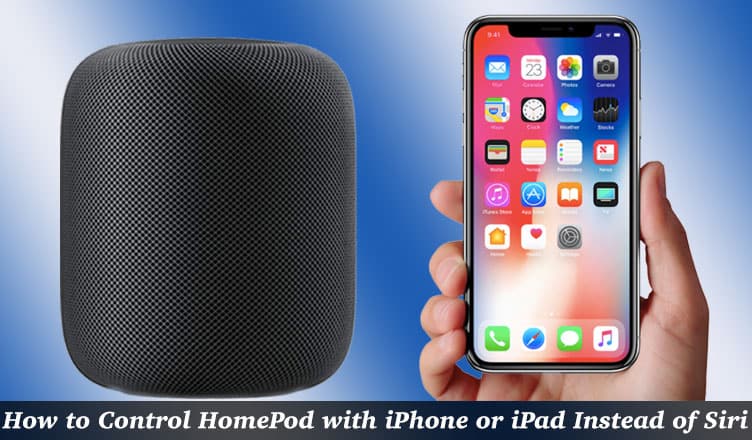 Siri is a nice voice assistant you can use to control your HomePod, but every time you can’t ask this intelligent assistant to turn up or turn down the volume. Sometimes, you don’t want to say “Hey Siri” while you are listening to podcasts or music playback; for this reason, you can use your iPhone or iPad to control HomePod.

You can access playback controls for HomePod in Control Center and in the Music app on your iOS device. Both the methods are explained with steps below.

How to Control HomePod Using iPhone and iPad Instead of Siri

While watching your choice of TV show, or listening to your favourite songs or watching podcast, you are not supposed to invoke Siri to discover which song is being played, or to adjust the volume, or skip ahead.

This method also works with Apple TV audio on HomePod.

Step #1: Bring up the Control Center by swiping up on your iPhone 8 or earlier models. If you are using iPhone X, you have to swipe down from the top right corner to use Control Center.

Step #2: Now use 3D Touch or press and hold on the Now Playing panel in Control Center.

Step #4: Then you need to tap on Play/Pause button to play or pause audio.

Step #5: To skip the song, simply tap or press the Skip Song button.

You won’t be able to skip back to a previous song/track.

Step #6: Drag your finger across the playback slider to rub forward or back on a track.

Step #7: You can also drag your finger across the audio slider to turn up or turn down the volume.

You can use Music app on your iOS device to get playback controls of the song, which is being played on your HomePod currently.

This method also works with Apple TV audio on HomePod.

Step #1: Open the Music app on your iPhone or iPad.

Step #2: Next, tap on Now Playing banner from the bottom of the screen.

Step #3: Now you need to tap on the AirPlay icon seen at the bottom center of your device screen.

Step #5: You can now tap on Play/Pause button to play or pause audio.

Step #6: Skip a song/track by tapping on the Skip Song.

You are not able to go back to a previous track.

Step #7: Finally, you can drag your finger across the playback slider to rub forward or back on a track.

To turn up or turn down the volume, drag your finger across the audio slider.

Is there any question regarding the use of an iOS device to control audio playback on HomePod? Share your feedback with us in comments below and Follow us on Facebook, Twitter and Google Plus for more tips and tricks.