Google has always been criticised in the past due to the perceived lack of security. But with their newest feature, ‘Google Play Protect,’ the search giant is offering a real time malware scanner for their Android Operating System. But still, people are rather confused on how this will change the most popular mobile operating system on the planet. In this tutorial, we will deal with how to enable and disable Google Play Protect on Android.

As mentioned, many people criticised Google for the lack of security, but there was also a large demographic willing to make the sacrifice in exchange for the open eco-system. So, with ‘Google Play Protect,’ will your freedom in the OS be negatively influenced.

What is Google Play Protect?

If you remember the ‘’Verify Apps’ service from Google, then you can make the analogy that Google Play Protect is merely an evolution of that feature. The feature will monitor the system for installed apps and to-be installed apps on the system, and then inform the user if there is something suspicious. The service was announced last year in May, but it is currently being rolled out with Google Play Service 11 and all higher iterations.

That being said, if you are using an Android Device, which wasn’t shipped with Google Play Store, then it is likely that you won’t get the feature. All other should get the update as soon as it is available. Now if you are unsure if your device has already been updated with the feature, here is how you check: 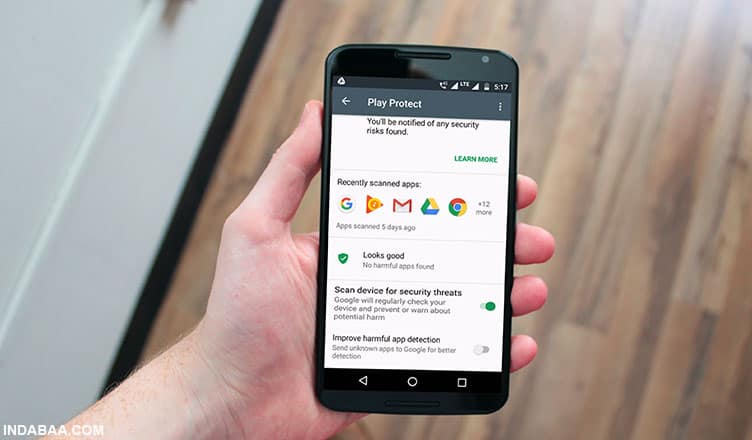 How to Check if Your Android Device has Google Play Protect

The Google Play Protect can be found deep in the recesses of your device’s settings panel. You should note that the feature cannot be accessed via the Play Store app. So to access the feature, you will have to go to Settings → Google → Security → Google Play Protect. Here you can check on which apps were scanned, and how long ago. 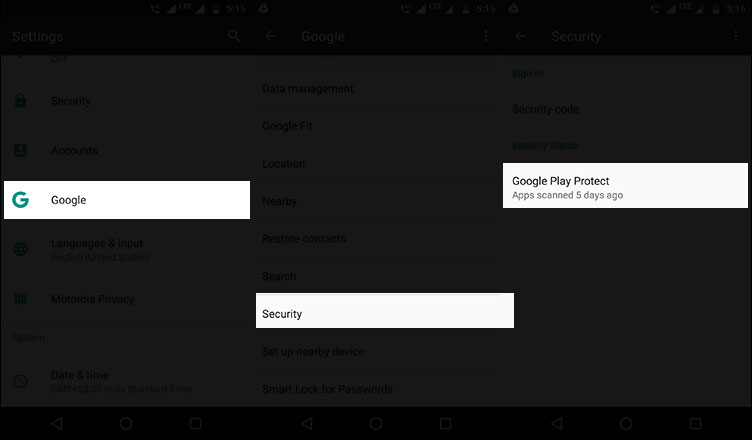 How to Enable and Disable Google Play Protect on Your Device

However, if you don’t want automatic scanning on your device, then you can disable the feature too. To disable the feature, you will have to head on over to the Settings → Google → Security → Google Play Protect. Here you will find the options ‘Scan Device for Security Threats’ and ‘Improve Harmful app detection.’

The first option mentioned here is always activated by default. The second option is however disabled. This is used to help your system to scan for malware in apps you installed from third party sources.

Now to turn off Google Play Protect, just turn off the option mentioned in the beginning, and you’re good. Now added security on your Android device is never a bad thing. So it is advised that you keep Google Play Protect activated unless you really know what you are doing.

The Google Play Protect functionality is designed to scan the Google Play Store and your device for malware. However, it will not consider third party websites and other app stores which host Android apps. But if you attempt to install a third party app which Google deems malicious, then the feature will warn you the same.

To check the status of your installed apps, you can head over to Google Play Protect option to see when the last scan was performed on your device. Here you will also find a list of potentially harmful apps which you should delete from your device. 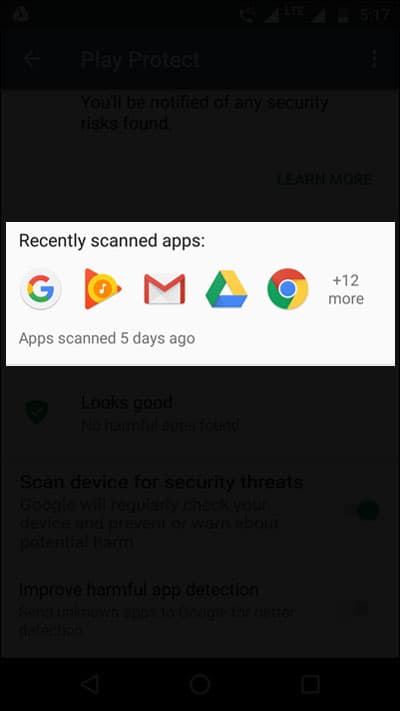 After the feature has been fully implemented, there should be verification badges on the Play Store listing pages of all the apps. This should help users get an idea of the safety of each app listed on the store. Furthermore, if any rogue developer decides to include a malware into their apps, after getting a clean sheet the first time, then that too will be stopped.

One area of celebration for the Android platform is that it gave its users complete freedom and control over the OS. So with the inception of Google Play Protect, people have been wondering if this freedom, especially the ability to use third party app stores and use of side-loading will get hampered or compromised.

The main fear is on whether Google is planning to go for a stricter and controlled environment as Apple has on their iOS platform with the ‘walled garden’ approach.

Now only the future will tell if Google has such plans on their mind. But for now, there will be no such problem with side-loading apps or with using the third party app store.

What are the Privacy Concerns with Google Play Protect?

In the process of keeping your device clean from malicious apps, does Google plan to gather information about the nature of apps installed on your device? This is a privacy concern many people currently have in the back of their minds.

In response to this question, Google already has full knowledge of which apps are downloaded through which Google accounts and on what devices. So the better question in this regard would be: how would the nature of collecting data change as Google introduces the new feature. 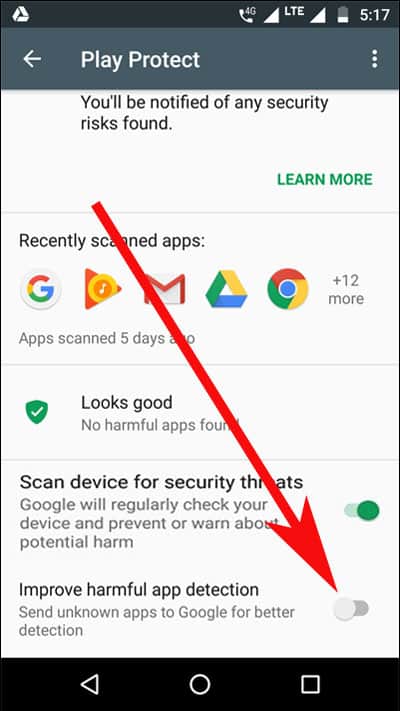 Well, as you can see from the image displayed above, there is an option that makes you share information about non-Play Store apps you have installed on your device. Luckily, the feature is disabled by default. But this is the situation now, and we can only speculate what Google would decide to do in the future.

Will Google Play Protect Deliver as It Promises?

In brief, this is something which we can only learn as time unravels. As for now, there are only two schools of thought regarding the matter. One group of people is rejoicing as Google is finally taking security more seriously, while the other group is getting concerned about the privacy implications this will bring to the table. But one thing that will surely happen is that there is going to be a tremendous cut down on the number of malicious apps currently circulating Google Play Store.