Finally, Google has sealed the lips of rumour mongers by launching two smartphones: Pixel and Pixel XL in its event in San Francisco. No more teases and rumours, just official announcement by Google on its flagship Pixel smartphones.

The Pixels are Google’s latest brand of first-rate Android smartphones, which are available exclusively on Verizon in the United States. Since accessory makers have already rolled out Google Pixel Cases and Google Pixel XL Cases, it was confirmed that Pixel would be a 5-inch full HD (1,920 x 1,080) display and Pixel XL would flaunt a 5.5-inch Quad HD (2,560 x 1,440) screen.

During the event, it was announced that Pixel starts at $649 (if you want to pay full amount) or pay $27 in installment per month. You can choose your Pixel in ‘Quite Black, ‘Really Blue’, and ‘Very Silver’ colors.

Pre-orders have started in the United States, Canada, Germany and the United Kingdom at retailers like Google Store, Best Buy, Walmart, Target etc. Indian consumers have to wait till October 13 to pre-order the two smartphones at Rs 57000/- onwards.

In India, the phone will be made available by three major retailers: Reliance Digital, Flipkart, and Croma. 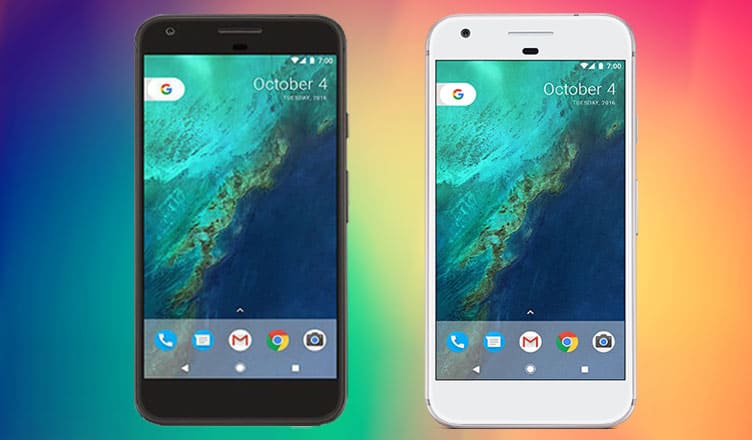 You can use Nougat 7.1, the latest Android operating system on the Pixel phones. Nexus users have already started updating their phones to Android 7.0 Nougat in August. LG V20 was the first phone to have Android Nougat.

It was quite obvious that when a brand launches two phones, there can be some remarkable differences. This happens with Pixel phones also. The battery capacity have striking difference; Pixel has a 2770 mAh battery and the Pixel XL boasts 3450 mAh battery. However, there are quite a few similarities in the phones.

Both phones are powered by a Qualcomm Snapdragon 821 processor; internal storage (32GB/128GB) and RAM of the phones are equal. Both Pixels have 4GB RAM; you cannot expand any Pixel phone with an external microSD card.

Pixel and Pixel XL have equally powerful camera; both are equipped with 12.3MP f/2.0 aperture camera on back. Optical Image Stabilization and an 8MP front camera are also there in both phones. Due to optical image stabilization, camera can stabilize video by default.

The camera scores high on DxO camera rating with 89 points, thanks to its zero shutter lag.

Until this, there is nothing new you have found. The wait is over; Google has installed a new feature Smartburst to click multiple photos and select the best one with Google’s strong AI software.

A new feature called Smartburst captures multiple photos and selects the best one with the phones’ powerful AI software: 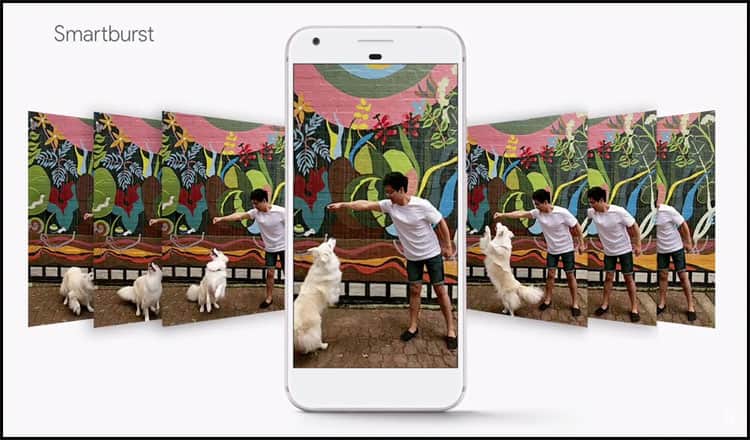 For users’ convenience, fingerprint scanners are given on the back and a USB Type – C port at the bottom.

The best is coming now. Software is the soul of any communication device and to make Pixel phones more user-friendly, Google has installed Google Assistant. Now this is the news as the two phones are the first loaded with Google Assistant. Like Siri on iOS devices, Google Assistant will help users perform activities like showing upcoming events, finding photos, making reservations etc.

Batteries can really give iOS devices a good run for their money; both phones can be charged very quickly – a 15-minute charge can last up to 7 hours.

Pixels will also have privilege to get Google’s software updates first (Nexus phones used to enjoy this prerogative). Updating your Pixel phones will be easier with Google’s automatic updates that download and install in the background. The update is done automatically when users reboot the phones.

Want to switch to Google’s Pixel phones? Use its Quick Switch Adapter that makes this migration a breeze.