Apple revealed its iOS 11 at its WWDC 2017 keynote promising significant improvements from its predecessor iOS 10. Before it will be available to the end users, the software will be available to developers for testing purposes. It has a whole new design and unique features like a new tab has been introduced known as Today which would help you to identify new apps. Dedicated tabs for games and its Control Centre with 3D Touch are some of the other hidden iOS 11 features.

There are numerous key features which were talked about in the 2017 keynote, however, to add to your admiration, there are several hidden iOS 11 features which no one is talking about but add immense value to this new launch. Here, we have summarized top 42 hidden iOS features for you to be well equipped with software before it’s updated for your device. 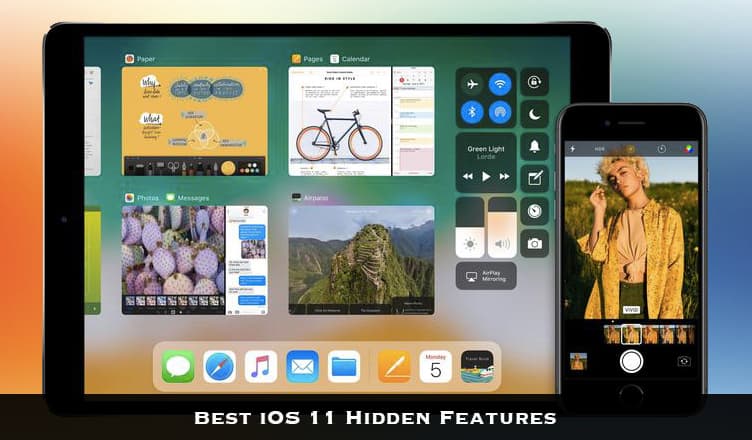 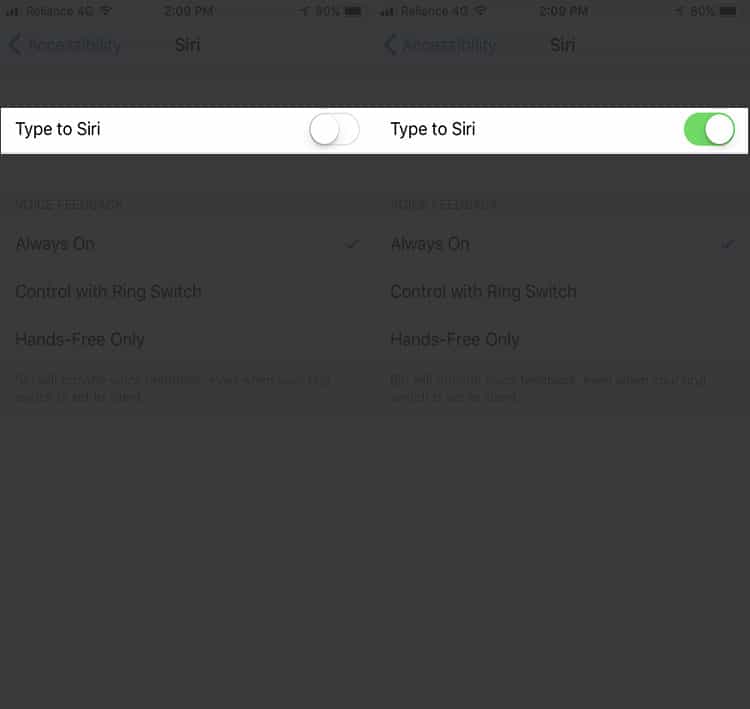 The voice assistant feature has further been improvised with features like introducing 2 new voices, fluent language voice over & translation, music related commands. However, the most awaited one is its functionality which enables you to type your queries/commands instead of talking it through.

To Enable  “Type to Siri” in iOS 11 Go to Settings→ General→Accessibility→ Siri → Toggle on Type to Siri Option.

Also Check : How to Enable Type to Siri in macOS High Sierra 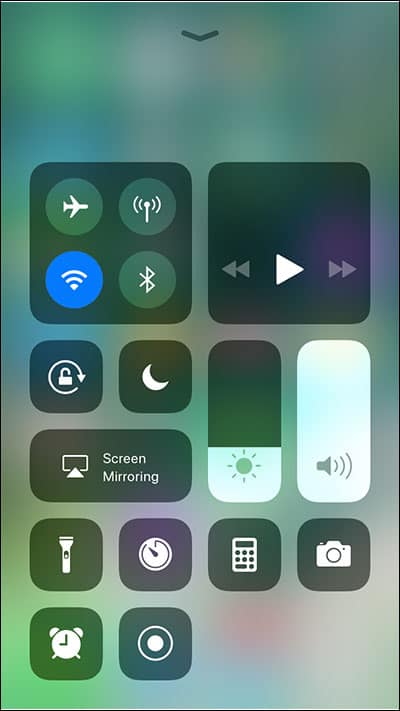 With iOS 11, Apple has re-designed the control center edge by adding more shortcuts and clips. But what a lot people don’t know yet is that it could be customized to reflect what needs to be there or not. You simply need to access Control Center through device’s settings to add or remove options.

Also Check: How to Customized Control Center in iOS 11 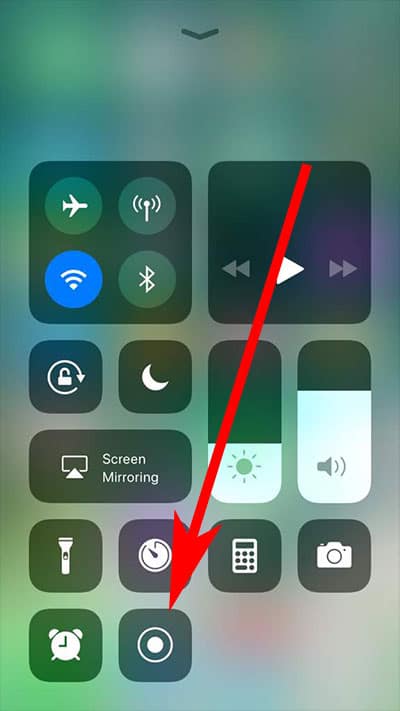 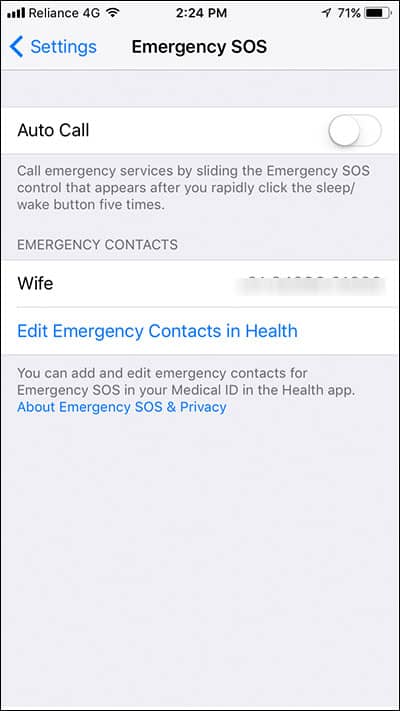 Emergency SOS mode has been introduced to all the iOS devices now which let you enable the auto call option which could be triggered when the user quickly presses the sleep/wake button for five times consecutively. This feature automatically calls the added emergency contact/service to send an alert.

The usage of QR codes has been there from quite some time now and is quite popular when it comes to day to day usage. Now it is added to iOS 11 which enables you to scan QR code automatically when it’s been captured by your device’s camera.

Also Check: How to Scan QR Code on iPhone With Chrome

With new iOS 11, you can now select multiple apps and drag them all together to a new destination. You would need to tap on an app till the time it starts jiggling and then you can drop it to another page. 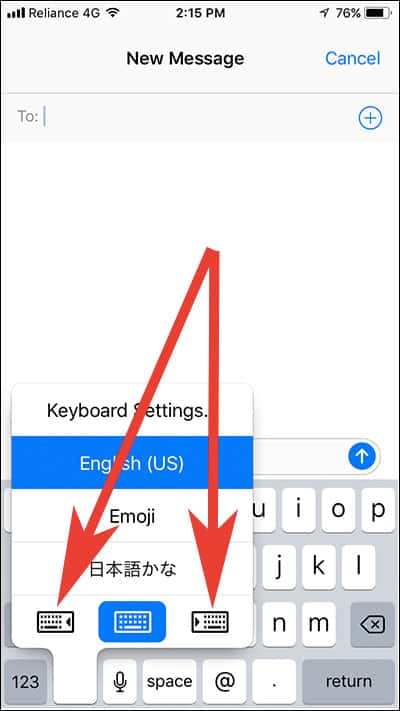 With one handed keyboard functionality, which will take away the hassle to use both the hands in the tiny phone screen. It enables you to move the keyboard either to the left side or the right side of the screen. You just need to use the Globe key on the keyboard to select the option.

One of the hidden iOS 11 features, there is a functionality to flick the key in your iPad Pro, by simply swipe up the key on the keypad to input alternate value like number, punctuation or symbols.

With iOS 11, Apple has further enhanced the features of switch control typing. Now, you can select, drag, type and draw freehand by using a switch to choose an action.

Now, you don’t need to unlock your screen every time to view a notification. With iOS 11, you will be able to view all the unread notifications on the locked screen itself. Simply swipe the blank screen to view the notifications. 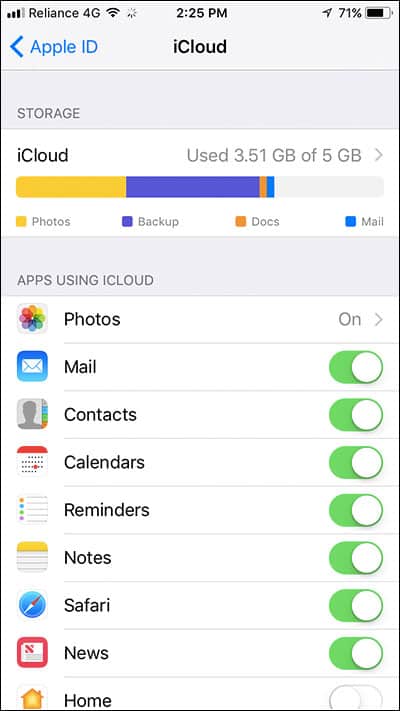 iCloud is the place to save all the data on your iOS device, hence giving its due credit, Apple has re-designed the storage system and now will be termed as iPhone storage in iOS 11 version. The icon will reflect on top of your screen and all the apps can be viewed basis the space occupied by them.

iOS 11 now lets you have some control over the photo library in iCloud. If the transfer is interrupted by some reason, you can manually initiate a transfer to have a hassle free sync. 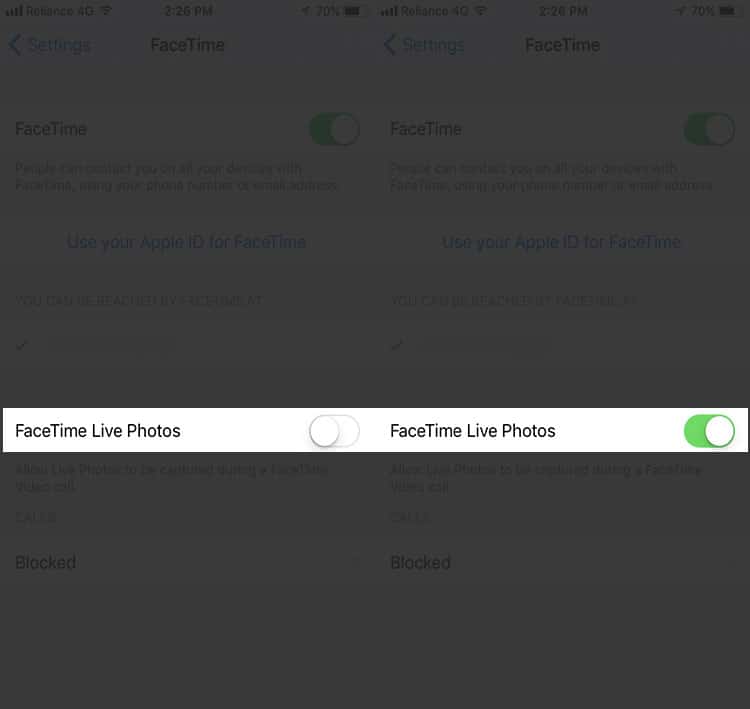 The iOS versions already had a feature of taking live photos, now it is just been further enhanced with the face time calls, wherein you can take the live photos whilst the calls which gets automatically saved in the Photo app.

Amongst other improvements in the Photo app, animated GIFT support is available now which will let you add GIF images to the stickers, videos and photos. 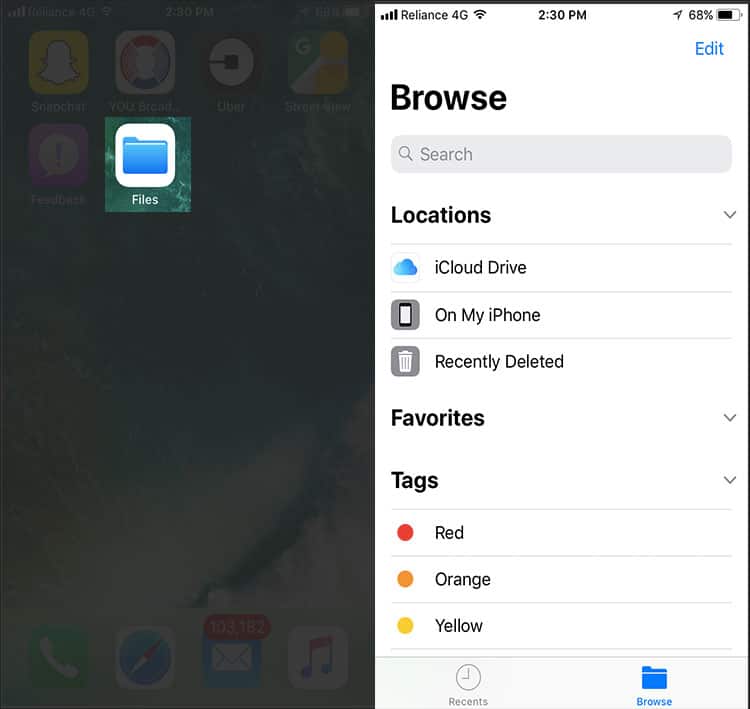 iCloud drive has now being replaced by Files app which is preinstalled when your device is updated to iOS 11. It will include your local files as well as data stored in third party storage apps.

One of the new features added to the iCloud is family sharing which lets you share the storage capacity with your family members and close friends. However it is only applicable if you have a storage plan of more than 200GB.

With Apple Pay will enable you to make payments person to person. It’s going to be a part of iMessage app drawer. It’s a multi-purpose account through which you can transfer, make purchases from Apple store as well withdrawing money from your bank account. 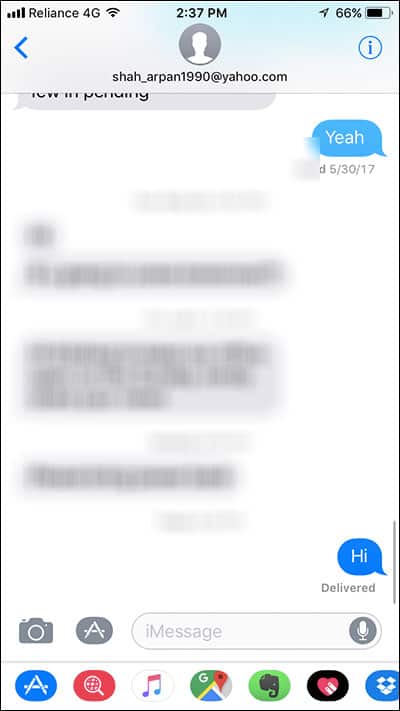 You can synchronize your chats from your previous device through iCloud which will then automatically reflect in iMessage apps and stickers using a reformatted app drawer. 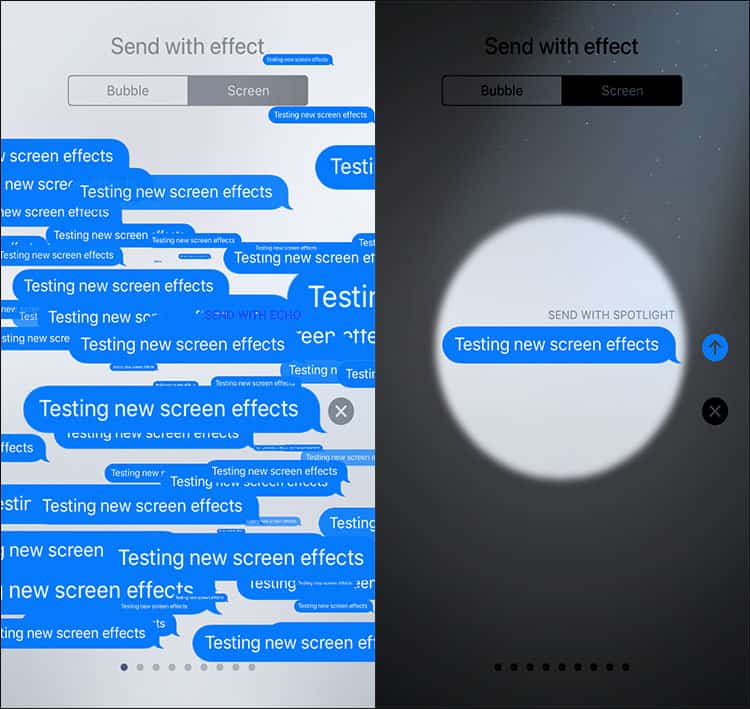 iOS 11 features 2 new full screen effects including ‘Echo’ and ‘Spotlight’. You can use these to have an enhanced and exemplified screen experience. 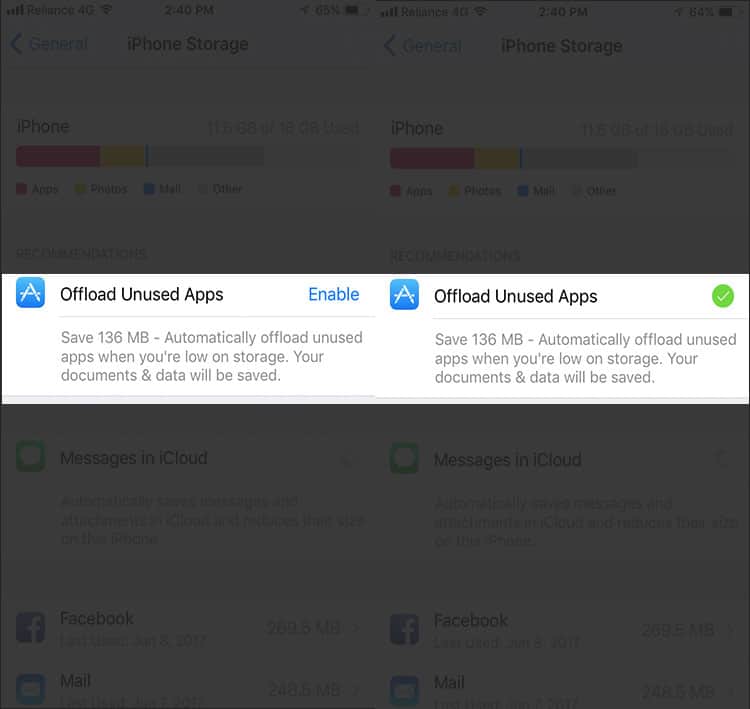 In the earlier iOS versions, you had the option of uninstall the unused apps which you can do anytime or could set up reminders for unused app. With iOS 11, there is a function in storage tab which uninstalls the app which is low on usage. If you are worry about the data, be assured that it only uninstalls the app not the data which is already save in your device.

Also Visit: How to Offload Apps in iOS 11 on iPhone or iPad 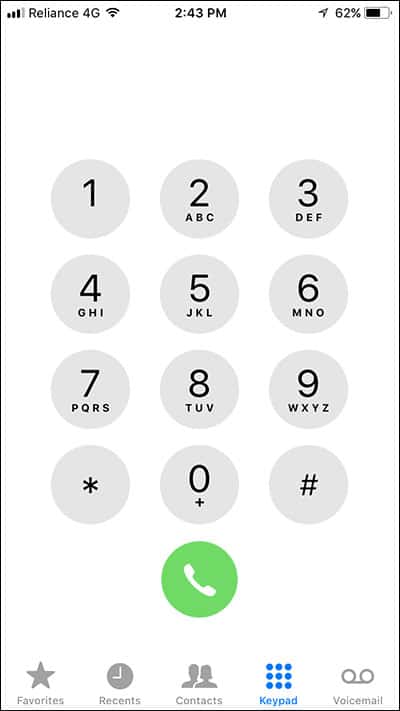 A lot of us may not even realize it whilst using our iOS devices day in and day out, however, there has been a slight change in the font features of Apple devices. It has enabled bold typesetting, ensuring that the headings are written in bold format. 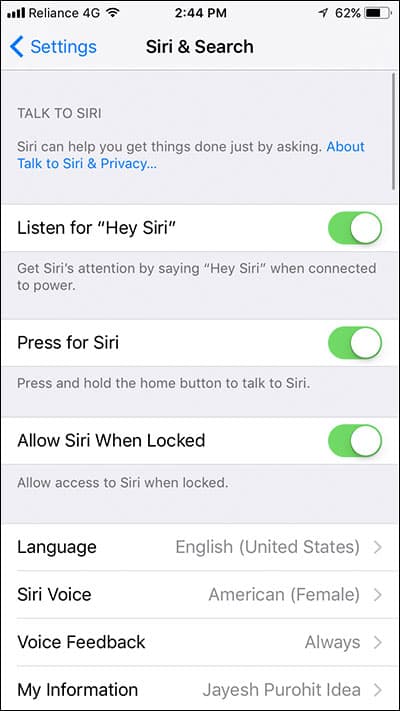 There is a new option added in Settings, termed as Siri and Search which provides a common interface for Siri and Search settings t enable users to initiate search with voice capability and can activate options like Allow Siri when locked and Press or Listen for Siri. 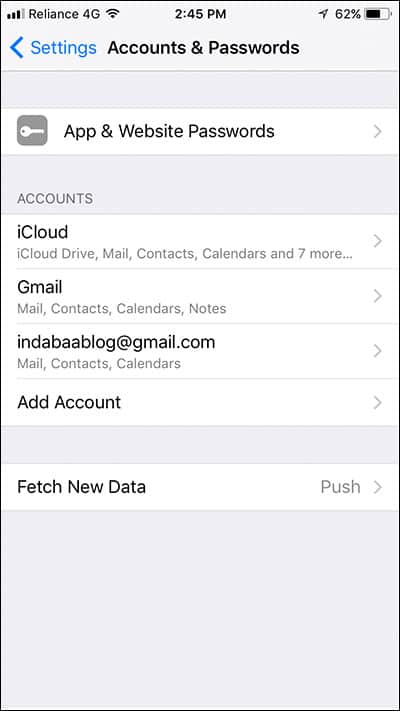 Another option added to the Settings under the head of ‘Accounts and Passwords’ which gives you access to the iCloud and other mail accounts and passwords. In addition, you can also access keychain passwords as well which would only require an authentication before sharing the information.

New features have been added to iOS web browser i.e. Safari. Now, you can use 3D touch feature to switch between different tabs as well as view information like flight statuses, word definitions, converting metrics and do calculations as well.

Apple has enabled the feature of NFC chip for the third party designers to create new apps which supports better communication. It will have an option of password auto fill which encourages to have a 1password approach in the coming months.

AirPod settings have been further improvised, which enables you to use the left and right AirPod for different purposes. For example, you can use the right one for Siri commands whereas second can be used for listening to music or Play/Pause.

Whenever we transition from an old device to a newer iOS version, a lot of users are stuck with the thought of transferring all the information to the newer device. Hence, to make it easy, there will be an automatic setup feature prompted when the 2 devices come closer for transferring data.

Now you can use a long press on any app to view a widget like pop for the files saved in a particular app. It is primarily useful for the app which has a lot of data or deals with heavy data files. 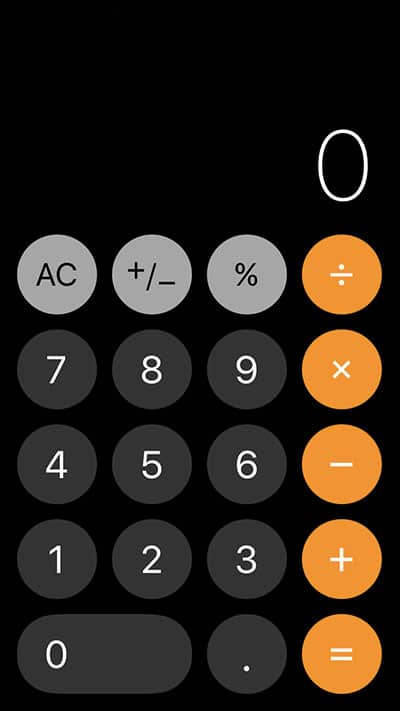 The calculator app has been re-designed enhancing its existing features. Now, it has a new creative icon as well as circular shaped calculator keys which give it a classic look of a keypad instead. 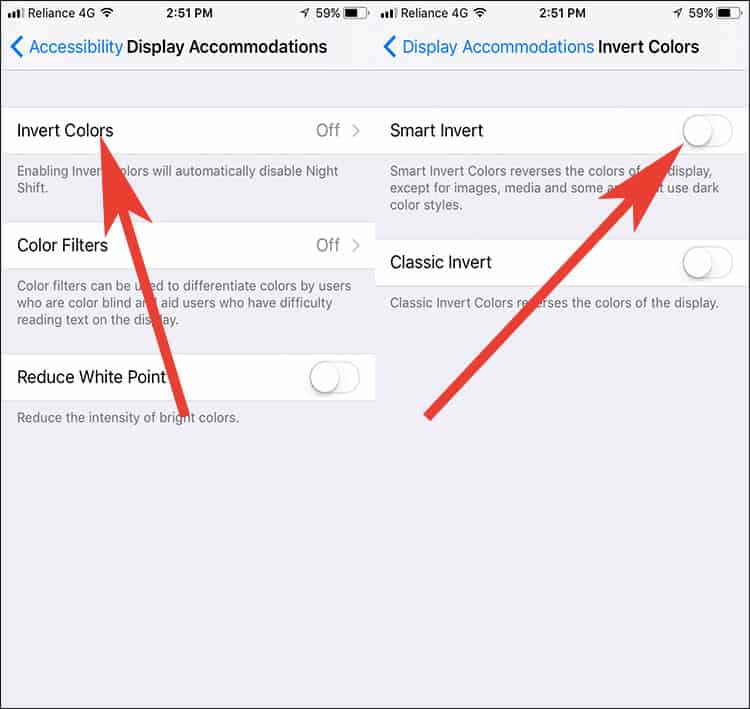 New option has been added under display accommodation and then invert colors, termed as Smart invert which reverses the color for UI elements to start with and you never know it will expand its horizon in the coming versions of iOS 11.

Also Check : How to Enable Dark Mode in iOS 11

In iOS 11, you can use Apple pencil as a shortcut to open notes, adjust text to fit images, insert & pin down the notes as well as scan the documents.

Also Read: How to Scan Documents on iPhone or iPad in Notes App

Email app is one of the essential utility of any of the smartphones. Apple mail app has been further improved with features like identifying top hits while doing an email search and you can add inline drawings to your emails.

Siri assists you in selecting news topic basis your interest in the news app. It also enables you to personalize features of top stories as well as lets you create spotlight tab for ease.

In the camera app, a new feature is added wherein you can change the features of an image like adjusting the skin tone as well as reducing or adjusting the size of the images.

With iOS 11, Apple has introduced a feature of sharing your Wi-Fi hotspot password with adjacent devices with an automatic notification going to the primary user. The device requesting the access cannot view the exact password for security reason.

Under the Spotlight, features an option through which you can details about the relevant airport and your flight details in case you are hush to seek quick information while travelling or expecting someone.

With Home kit being quite popular amongst users, Apple has included features like setting up home kit on your devices and it accessories.

Now, iOS 11 supports multiple international languages through different means. For example, you can input English alphabets on a Japanese Romanji keyboard. There are language specific keyboards for Kannada, Malayalam and Odia which have been recently added. You can use bilingual dictionaries for French, Hindi and Russian.

iOS 11 enables you to annotate PDF files in iBook whilst accessing and reading it from your iPhone or iPad.

It is one of the optional features in iOS 11, which you can set up while you are driving. It restrains you to receive notifications when you are driving a certain speed and notify the person trying to reach out to you about being busy driving.

Read: How to Block Phone Calls and Messages on iPhone While Driving in iOS 11

These are some of the hidden iOS features which we have been able to identify for you and there could be many more, for which we would continue to explore whilst knowing iOS 11 features better!