Touch Bar was first introduced in October 2016 in MacBook Pro 15” and 13” versions. While many users began to appreciate its features wholeheartedly, there are quite a few who want to add, remove and rerrange buttons from Touch Bar Control Strip and Within Apps on MacBook Pro. They particularly hate to see Siri in the top right corner of the Touch Bar on their MacBook Pro.

Thankfully, Touch Bar on MacBook Pro has many customization features. Users can add or remove many functions or virtual buttons in Touch Bar settings of some apps. You can also change the Control Strip on the Touch Bar and customize Touch Bar on your MacBook Pro.

Not having the latest MacBook Pro with Touch Bar? You can still experience Touch Bar feature on your older MacBook. 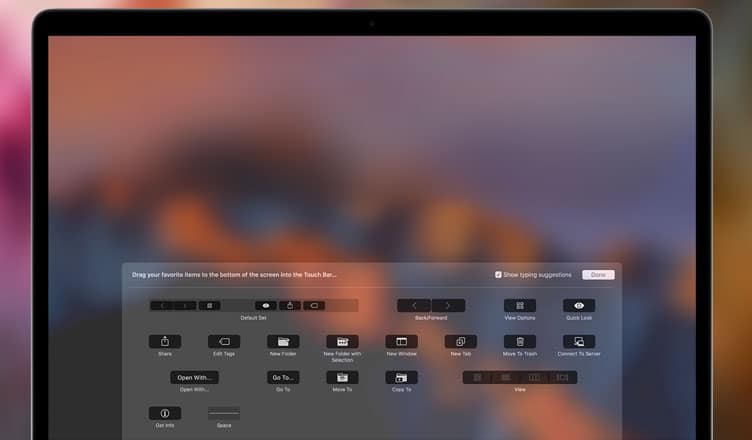 What is Control Strip?

Control Strip is nothing but a place, where you find tools like volume controls, screen brightness, quick access to Mission Control, and other such features. Earlier, these controls were placed on the row of function keys on traditional Mac keyboard. In the latest Touch Bar, all such controls are put on Control Strip.

Normally, four tools are seen on the Control Strip, which can be expanded with Expand button (<); these buttons are located on the right side of Touch Bar. Alternatively, you can disable app controls and keep the Control Strip expanded across the Touch Bar forever. Control Strip can be managed by adding or deleting tools on it. For example, if you frequently tap on Siri button by mistake, you can remove it and put another tool that can be useful to you often.

If you set expanded Control Strip as default display, you can easily access system tools like Lock Screen and playback controls. You should go for this only when you don’t give a damn to different tools available in all the apps, including supported third-party apps. Note that once you keep Control Strip expanded, you cannot use Touch Bar tools in other apps. You can use Spotlight to search keyboard settings or access them manually through System Preferences.

Step #2: A drop-down menu appears; you need to click on System Preferences.

Step #4: A dialog box will appear on the screen; click on Keyboard tab.

This will enabled Touch Bar to display Control Strip tools only.

How to Get Rid of Control Strip from Touch Bar

If you think that Control Strip will never be useful to you, you can remove it entirely from the Touch Bar. You can use Spotlight to search Keyboard settings or access them manually via System Preferences.

Your Touch Bar will display app controls only. Note that Control Strip will remain blank in case the app you are using doesn’t support Touch Bar.

How to Add, Remove and Rearrange Buttons from Touch Bar Control Strip on MacBook Pro

Make the most of Control Strip by doing some customizations on it. You can add or remove buttons or go for the rearrangement of tools on the Touch Bar.

Step #1: Follow the first three steps as mentioned above.

Step #2: On the Keyboard dialog box, click on Customize Control Strip option. You can see a customization panel and the Mac screen will blur. Buttons on Touch Bar will start wiggling.

Step #4: Similarly, you can adjust full control strip by tapping Expand button (<), which is on the left of the four tools in collapsed mode.

Step #5: Drag a tool from screen into the Touch Bar to put in to Control Strip.

Step #6: Next, hover the cursor down to Touch Bar and choose a tool to remove it from Control Strip.

You can see that when you hover the cursor on the tools, they will light up.

Here, you can do two things: either drag the tool into Trash can on left of Touch Bar or drag it upward, back to the tool panel on screen to delete it.

Step #7: You can rearrange the order by selecting a tool on Control Strip and dragging it to a new location on Touch Bar.

This is how you add or remove and rearrange tools from Touch Bar Control Strip on MacBook Pro.

Touch Bar is such an excellent feature that people love to explore this every day. If you are keen to know more about it, you can Get Macbook Pro Touch Bar Support in Chrome as well. It is also noticed that MacBook Pro Touch Bar becomes unresponsive or got stuck.