As the countdown to the final release of iOS 11 begins, its popularity is burgeoning with every passing day. People have appreciated iOS 11 Files app, drag and drop feature, Dock for iPads, all new App Store, and most importantly – brand new Control Center. Nobody has ever thought of this new Control Center on their iOS device, and perhaps therefore, some users have felt a terrible jolt by its haphazard design. However, many Android users (who religiously follow iOS releases) have shown keen interest in this new look of iOS 11 Control Center. And now they want to get iOS 11 Control Center on Android device.

Please note that you can use any Android phone running Android 4.1 and later version to install iOS 11 Control Center on Android. 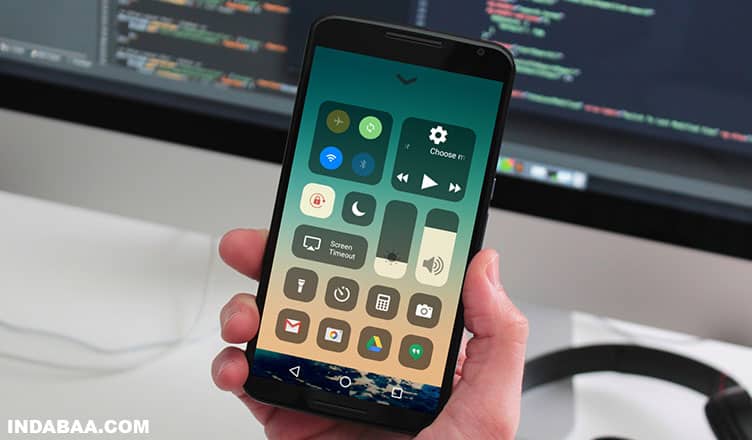 How to Get iOS 11 Control Center On Android Phones

Your Google Play Store offers apps galore to use iOS 11 like Control Center on Android smartphones, but not all are worth downloading. If you ask me, I am impressed with the results of ‘Control Center IOS 11’, which is a free app available on Google Play Store. This app offers nearly perfect results as one gets on his iPhone or iPad. You can surprise your iPhone-using friends by showing them your own Android Control Center.

After installing the app on your Android device, it will ask you for some permission; you have to grant them some access, failing which, the app begins to crash while you are using it. Once you download and install the app, it will guide you to the settings screen, where you have to grant a few permissions for a smooth run.

Like your iOS device, you can customize this Control Center on Android phone. A step further, you can access Control Center on your Android device by swiping left, right or from bottom of the screen. This facility is not even there in your iOS device. Moreover, you have liberty to enable the size and colour of swipe area on the screen. Simply open the app and tap on Size.

A glaring feature of this app is that you can open Control Center from everywhere; just enable ‘Show on everything’ option on the app and you can access the Control Center on the locked screen of your Android phone.

Once you download Control Center IOS 11 on your Android device, you can use its amazing feature ‘Add favourite app’. This allows you to add app shortcuts. From the home page of this app, tap on ‘Add favourite app’ and then hit the ‘+’ icon. You will be presented with a list of apps and you can select your favourite apps.

I frequently use Evernote as I have to jot down some points or notes every day. So I selected Evernote, which is not easily accessible from the Control Center. Among other cool features, Control Center IOS 11 offers Assistive Touch feature on your Android phone; you can also change colour and the background of Control Center, and change language too.

To give you an iPhone 6s like feeling, this app also boasts 3D touch feature. Simply long press any icon in the Control Center; but note that the feature doesn’t work on all icons. For example, you cannot use 3D touch gesture on Music icon.

If you can manage with those frequent ads on the app, this is probably the best Control Center app for Android devices. You