Once you set alarm on HomePod, you would love to hear melodious alarm tones. Use your HomePod as an alarm clock and wake up with sweet sounds.

This new alarm clock replacement can also be used to remind you of important tasks you have to do during the day. Get all that briefings from HomePod; but before that, set and manage alarms on HomePod. 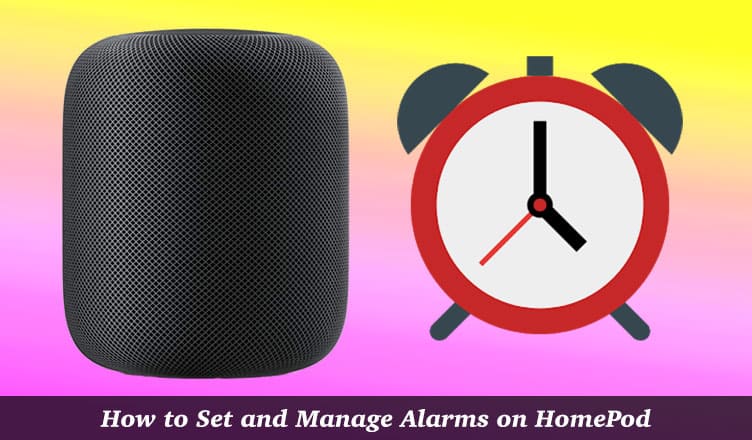 How to Set Alarms on HomePod

How to Set Alarm on HomePod

You can use either Siri or Home app on your iOS devices to create and edit alarms on HomePod. Among the two, the simplest way to set up alarm is to use Siri, which can help you create recurring alarms you can use every day.

Note that you can label your alarms so that it is easier for you to remember them and reference those alarms when you wish to use Siri commands again. Now, try these commands listed below:

How to Edit or Manage Alarms Using Siri

Managing alarms means you can delete or change your alarms using Siri on HomePod. For example, if you wish to remove an alarm, you can command Siri, “Hey Siri, delete the 6:00 am alarm” or “Hey Siri, delete all my alarms”. Siri will quickly remove all the alarms set on your HomePod.

Similarly, you can change alarms on your Siri-enabled speaker. Simply use a command, “Hey Siri, change the 6:00 am alarm to 5:00 am”. You can also get to know what alarms you have set up on the speaker; say, “Hey Siri, what alarms do I have on?”

Your intelligent voice assistant will provide information about all the alarms you have set up on HomePod.

Feeling discomfort in using Siri to set alarms on HomePod? Not to worry! You can use Home app on your iOS device to create, view and, manage alarms.

Step #1: Go to the Home app on your iOS device.

Step #2: Long press or 3D Touch on the HomePod icon on the main screen.

You can set a new alarm by tapping on “+” button and to edit or delete the current alarms, you need to tap on ‘Edit’ button. You can disable an alarm temporarily by tapping on each toggle seen next to alarms.

When you tap on Edit button, you can add a time, make it repeat, and change the label of alarms.

IMPORTANT: Many users were under the impression that they could use songs as custom ringtones for the alarm on HomePod; it is a myth. HomePod doesn’t offer any such feature and every HomePod owner has to use the default sound of the alarm.

How to Disable Alarms Using Siri

When HomePod alarm makes noise, a white light flashes on the top of the HomePod. Tap on the top of your HomePod to turn the alarm off.

If your hands are occupied, you can take help from Siri to disable alarm: “Hey Siri, turn off the alarm”.

You can also ask Siri to snooze the alarm: “Hey Siri, snooze”. Your alarm will be snoozed for a short period of time before it explodes again.