Photos app is the most used app on Android phones and iOS devices across the world. People create unforgettable memories on their smartphones and tablets, and store them for some time. As happens with any device, it runs out of space and users have to remove those sweet memories from their device, if not from their natural memories, i.e. brain.

There is one major difference between iOS devices and Android ones: the latter has got more space to save photos, videos and other documents and data. Apple offers limited space on their iPhone and iPad; the more space you need, the more money you have to pay. While users can always use 15GB of space free on their Google account, which they can integrate with Android phones. This means if users can move photo library between Apple Photos and Google Photos, they can store some more photos and videos on cloud.

On Apple iCloud, people have to shell out a few more bucks to purchase space, where they can save their pictures and all. If you want to move your entire photo library from one platform to another, this information tells you how you can transfer photo library from Apple Photos to Google Photos and the other way round. 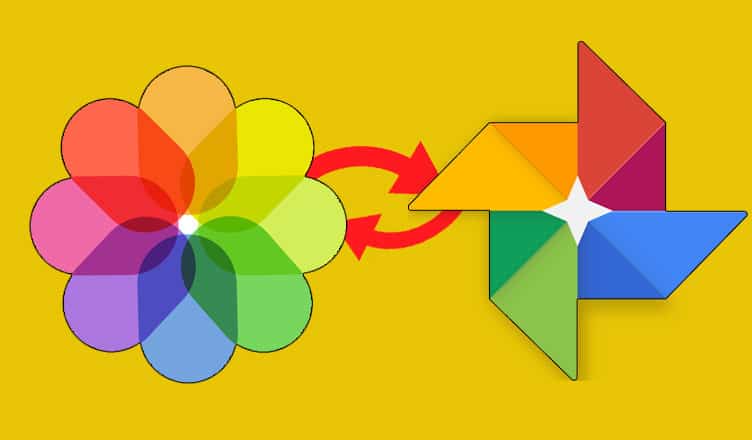 How to Sync Photos from Apple Photos to Google Photos

If you want to upload more photos on Google, you should edit the size of photos; better trim those photos and then upload them to Google Photos as Google gives you 15GB of free space for every account. And if you wish to transfer unedited photos, you should check Google Drive storage plans & pricing.

The desktop app asks you what photo libraries you like to back up when you start it; the iOS app will back up everything it can search.

Note that if you have deleted some photos or uploaded a few on iCloud, you won’t be able to move those photos to Google Photos. However, you can bring back those photos on macOS: Open Photos → Select Preferences → iCloud → ensure that Download Originals to Mac is selected. On your iOS device: Launch Settings → tap on iCloud → Photos → tap on Download and Keep Originals.

If you fail to get your iCloud photos back to your Mac or iPhone/iPad, you can use iCloud on the web. This is not as good as the method shown above, but in turbulent times, you can always resort to such workarounds. You can download photos individually; for bulk downloads, use Shift or Command key to choose multiple photos and then click on the Download icon. Save the photos anywhere in your system and then upload the same on Google Photos using a desktop client or your web browser.

How to Move Photos from Google Photos to Apple Photos

The primary difference between Google Photos and Apple Photos is that a user doesn’t have to store Apple Photos in the cloud; while in Google, users have to save all their photos in Google cloud. However, Apple asks for money if you want to use its cloud storage service to store photos.

Google Photos desktop app for macOS doesn’t offer two-way sync; however, Google Drive has this feature. Open Google Drive on the web, and launch Settings page from cogwheel; next, check the box marked Automatically put your Google Photos into a folder in My Drive under the General tab.

This doesn’t have any effect on what is saved in Google Photos; it only makes everything visible in your Google Drive. Now you should download and install the macOS client for Google Drive; ensure that Google Photos folder is selected in the list of folders to sync.

Here it is; all your photos and videos are brought down from the cloud. Select File and then Import in Photos app on your Mac to load in the recently downloaded content.

If you are using Windows computer, you can employ the same trick as mentioned above to get the images and videos downloaded. You could have used iTunes and your iOS device in place of Photos app on macOS; or simply use iCloud on the web to get everything up to the iCloud Photo Library.

As better option, you can also use Google Takeout service to download all your photos and videos from Google Photos; by this way, you can avoid using Google Drive syncing thing. All your data will be presented to you in a compressed folder, which can be extracted and moved to Apple’s apps on the desktop, on smartphone and in the cloud.

The two processes mentioned above reveals that you need a computer to jump from one cloud to another; you can’t go directly from your Apple Photos to Google Photos.