Typing Apple logo  is one of the cool features I love to use on Mac and iPhone/iPad. Apple’s devices store countless features that we can explore without the official support from Apple. As a matter of fact, Apple itself may not be aware of such hidden treasures users unearth during the use. However, this feature is not released recently; it has been there for long. But new Apple users would always like to know such hidden gems, and therefore, we publish this tutorial on how to type Apple logo  on Mac.

It is quite simple to type this Apple symbol; by using Apple logo keyboard shortcut, you can create this logo and send it to anybody using Apple products. Your friends would love to receive such emoticons and smileys on their iOS or macOS devices. Next time, if you want to write Apple Watch, you can replace the “Apple” by Apple logo.

How to Type Apple Logo  on Mac / MacBook Pro or Air

You can easily create a picture of Apple logo by using one of the Mac keyboard shortcuts. People love to use emojis in chats on social media and chat apps. It is a smarter way to fit more expressions without using words. If you are using Apple’s phones, you can use them and type Apple logo in iPhone and iPad as well. For now, let’s type Apple logo on our Mac.

On your Mac, simply press “Option + Shift + K”. This will create an Apple symbol wherever you want. 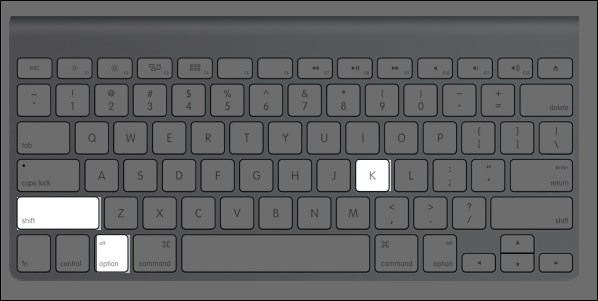 If you are using Mac mini and having Windows keyboard then just press Alt+Shift+K.