Apple’s annual Worldwide Developers Conference (WWDC) held at San Jose, California and was attended by around 5300 iOS developers from 75 countries. During its first day keynote Apple CEO Tim Cook made some important announcements.

The highlight of the event is the youngest attendee from Australia; a 10-year-old developer, who has developed 5 apps. Well, there is more to this event than the youngest iOS developer in the auditorium. Let’s check out the key iOS 11 features declared at WWDC 2017. 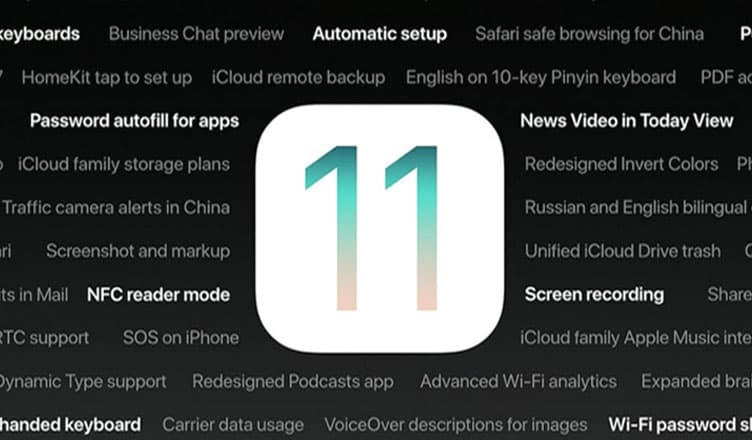 Apple begins its iOS 11 feature announcement with Messages app; in the latest iOS 11, if you delete a message on your iPhone or iPad, it will be reflected on your Mac also. Another major announcement is that Apple Pay is getting person-to-person payments.

Send and Receive Money via iMessage with Apple Pay

Users will be able to send and receive money via iMessage with Apple Pay. This clearly means that Apple has sidelined apps like Venmo, PayPal, and Square Cash. However, Apple didn’t make it clear if the tech giant will allow users to perform person to person payments outside of messaging app. The catch is that person to person payments with Apple Pay will live inside iMessage. Moreover, the money will be transferred to ‘Apple Pay Cash Card’; and there is no light thrown on if the money can be transferred to users’ own bank account.

With iCloud integration, iOS users can sign into any iOS device running iOS 11 and have all their messages. This clearly means if you remove or erase a message on your iPhone, this will be reflected on your Mac. The app drawer in iMessage is redesigned by Apple in iOS 11. If you are using a basic version of iPhone (16GB), you can send all your messages (except for the most recent ones) to iCloud and your device will have more space. iCloud receives another responsibility of chat service. Apple has made its Messages app more competitive against Facebook Messenger, WhatsApp, and Snapchat.

Apple is introducing major changes in Siri across several hardware platforms that support this voice assistant in iOS 11. Siri is enabled with a new voice that will be more natural and more visual interface to show suggestions and follow-ups to the original query. A new Translation feature is added in the beta version; this will translate English to Chinese, French, German, Italian, and Spanish. More language options will be added in near future. To make Siri more predictive, the digital assistant will use ‘on-device learning’. Based on your current use of Siri, it will get to know what you want next. And this new knowledge will be synced across all your iOS devices; however, it will remain private to you. Moreover, Siri will be more open to third-party apps; developers can integrate their apps with the digital assistant. Apple will roll out the updated Siri later this year in iOS 11.

Do Not Disturb While Driving

Apple cares for you while you are driving and to stop distracted driving, the tech giant announced this feature Do Not Disturb While Driving in its iOS 11. This will block notifications from showing up when Apple decides you are driving; the software will make this decision either through a Bluetooth connection or Wi-Fi Doppler. Your iMessage will automatically inform the other person that you are driving. You can set some contacts as important and Apple will not block such important contacts in your iPhone or iPad. Indoor mapping is also introduced in the Apple Maps. You can use this functionality when you are at malls and airports in your country. In malls, you can see a directory and where stores are located in relation to each other.

Your Apple Music is getting more social now in the latest iOS 11. There are some new social features that will be included in iOS 11 and these features will let users create profiles and share music with friends. In a new section called ‘friends are listening to’, you can see what other people you follow are listening to and liking. If you are not that social, you can make your profile private and hide your likes. Apple Music will also feature a new shared up next list, which allows users to let friends select which songs will come up next in a playlist. This is quite useful if you are using the new HomeKit 2, which gives you control over speakers and multi-room audio. For developers, Apple has announced MusicKit and now they can integrate Apple Music in their apps. Nike, Anchor, and Shazam are already using MusicKit. The music app is also updated on Apple Watch; in iOS 11, you will get bigger album arts, support for multiple playlists, automatically updated sections etc.

This year at WWDC 2017, Apple has actually surprised every developer and blogger, who looked for less and got overwhelmed by more. What were your expectations from WWDC 2017? Was your expectation fulfilled by Apple? Share your feedback with us on Facebook, Twitter and Google Plus.