One of the worst things that can happen to your iPad is for the Apple logo to be stuck on the screen. The tablet will no longer boot and this renders it useless. Even though this might come as a surprise since iOS is such a powerful operating system, there some issues that can cause turn iPads into paperweights. This happens mostly to older iPad models and it is caused by corrupt files that lead to system failures. If you find yourself in this situation and you don’t know what to do in order to repair your iPad and get rid of the Apple logo that is stuck on the screen, then you have arrived at the right place.

We have scoured the web in search of the most effective fixes that can help you remove the Apple logo stuck on the main screen and today we are going to present them all. We know that not everyone is tech-savvy and this is why we are going to explain every fix in a step-by-step manner. Without any further ado, let’s get into it and check out what are the top 4 fixes to stop Apple logo stuck on your iPad’s screen issue. 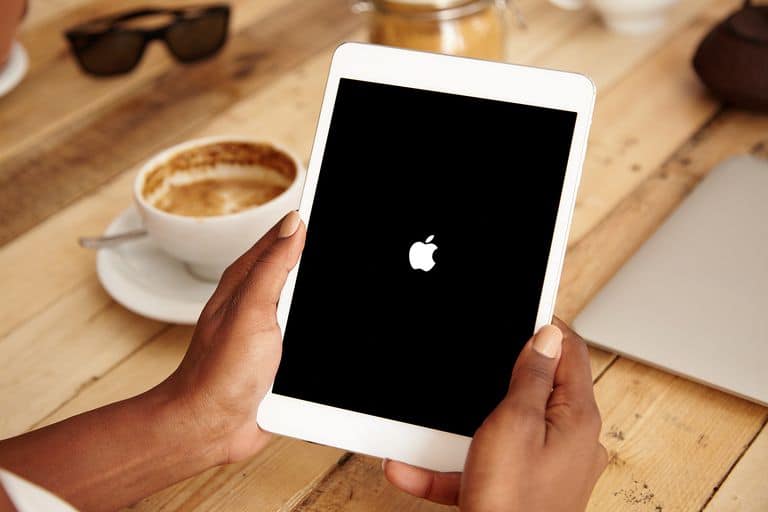 #1 Wait for All iOS Progresses to Finish

One of the main reasons why iPads get stuck in boot mode and don’t open properly is because not all iOS processes have finished loading. This can happen when you shut down the device and then open it too quickly, not giving the operating system enough time to power up. The best thing that you can do here is to let the iPad sit for 10 to 15 minutes, even though the Apple logo might be stuck on the screen. You can use this time to drink a coffee or tee while preparing to follow the next fixes if this one didn’t get the job done.

If giving the operating system 15 minutes to load didn’t solve your issue, then the next solution is to force restart the iPad. The force restart is helpful in all problems where iOS is causing issues. What’s great about force restarting an iPad is the fact that it also gives you the chance to troubleshoot for other problems. If you are no familiar with how to force restart an iOS-powered device, then you should follow the steps below.

For iPad with Face ID

For iPad without Face ID

#3 Use Recovery Mode to Update Your iPad

The force restart fix should get rid of most of your problems, but it’s possible that it will not get the job done. This is where our third fix comes in. If the hard reset didn’t fix your problem, then you might want to use the Recovery Mode to update your iPad’s operating system. To top it all off, using the Recovery Mode is also a safe way to make sure that your data doesn’t get lost in the process. Follow the steps below to learn how to use recovery mode to update your iPad.

For iPads with Face ID

For iPads without Face ID

After you have successfully followed these steps, the iPad will automatically reinstall your operating system.

#4 Erase All Your iPad Data with DFU Mode

The last method that we want to present is to erase all your iPad data with DFU mode. The reason why we are introducing this method as the last one is because it will erase all your data. If you didn’t perform a backup during this past couple of months, then you are going to lose all the pictures, videos, messages and all other files that haven’t been backed up. With that said, follow the next step to perform a full DFU (device firmware update).

For iPads with Face ID

For iPads without Face ID