Previous year, the mega search engine Google had launched its first hands-free voice activated smart speaker named Google home. It is a speaker that does its work as asked by the user. Apart from the technical utilities, it delivers a rich bass for Hi-Fi sound. The only con is that it does not support Bluetooth and the speaker feels incomplete without it. So the question may cross your mind: how to play music on Google Home via Bluetooth?

This year at the Google I/O developer conference held last May, they announced a planned update to enable the Bluetooth audio support for Google Home and Google Home mini. Few days later, the California based tech company, Mountain View released an update that allows the user to stream podcasts, music and other services to the smart speaker. It is yet unknown whether the speaker will support this feature to play music via Bluetooth. If you still want to listen to music on Google Home via Bluetooth, these simple steps will guide you: 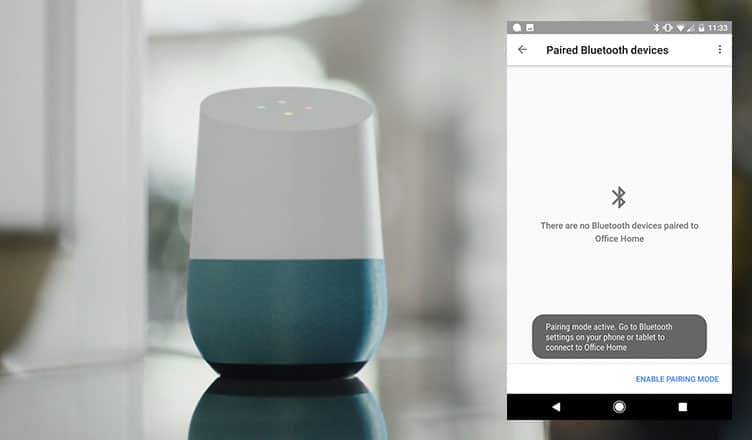 How to Play Music on Google Home via Bluetooth

Before you start, make sure that the Google Home speaker is running on the latest software update. On your smartphone, download the latest version of Google Home app from the Play Store. It must be running version 1.24.37.7 according to my last study. Update the smart speaker’s firmware version to 93937 or higher as for the Bluetooth feature to work. If you have followed the above steps correctly, you are now ready to play music with Google Home.

Step 1: Open the “Google Home” app on your phone.

Step 2: Tap on the “Devices” icon on the top right corner of your screen.

Step 3: Tap on the three little dots on the top right corner of your screen.

After enabling the pairing mode for Google Home, go to your phone’s Settings→ Bluetooth.

Select “Google Home” from the displayed list of devices.

Check if the toggle beside “Media audio” is enabled or not. By default, it should be enabled. Now, your smart speaker is paired with your smartphone. Open any media file from your phone and it will be streamed directly to Google Home.

Enjoy the immersing sound quality every time you play something from your phone, be it movie, music or any audio file. All in all, it is intelligent and supremely versatile in the ways it can be used.

Google Home is evolving quickly compared to its rival Amazon Echo. The Bluetooth streaming feature has been a part of it for a very long period of time. The massive song library of Google Home gives you millions of songs to choose from. This smart speaker has the potential to be the smart home command centre Google wants it to be.