The large screen of iPad Pro creates a lot of opportunities for pro users. For busy working executives, multitasking is must. In its latest iOS 11 release, Apple has taken special care of split screen view and slide over on iPad. To jack up your productivity at office or home, you need to use slide over and split view in iOS 11 on iPad.

You can use multitasking in iOS 11 in four different ways: Slide Over, Split View, Picture-in-Picture, and App Switcher. If you have used iOS 10, you must be familiar with these components; but in iOS 11, you will find some improvements. 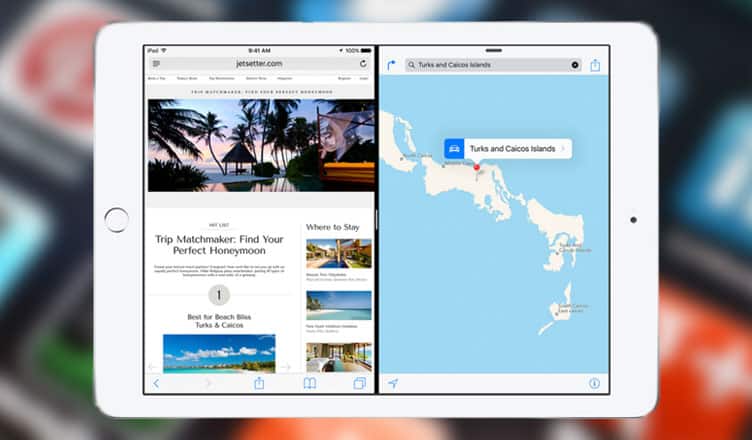 Slide Over enables users to launch and use a second app on the left of right side of iPad screen; when you use Slide Over, a small pane of iPhone size appears on the screen. You can hide this floating pane and reopen it at any time by swiping from the left or right side of your iPad screen. When you restart your iPad, you need to drag the app on the screen from Dock or Home screen.

Split View allows you to use two apps side by side for a long time on your iPad. The best part of this feature is that you can choose different size of the Split View panes; for example, you can select 50-50, 25-75 or 75-25 in a horizontal view. On vertical orientation, you have got only two options of 25-75 or 75-25.

While you are multitasking in the App Switcher, the apps in Split View will remain attached with each other. This is called App Spaces by Apple.

This component allows users to watch videos in a small, floating window along with your current work screen. Make sure that the app you are working in is supporting Picture-in-Picture.

When your iPad is in Picture-in-Picture mode, you can zoom in or zoom out the window, change the position of the video window on iPad screen, play or pause video, slide the video off-screen, or go back to its original app.

Unlike multitasking screen in iOS 10, you can open App Switcher in iOS 11 by double-tapping the Home button or using four-finger swipe upwards on iPad screen. There are four parts of App Switcher: Control Center, Dock, App Spaces, and recently used apps.

On your iPad, Apple has put the Control Center on the right of the screen; however, there is no major change in the functionality of Control Center in iOS 11. It is the same as it does on iPhone running iOS 11. You can quickly access App Spaces on the left of Control Center; it is called attached Split View apps by Apple. If you want to enter App Spaces, simply tap on it; note that you cannot separate App Spaces or create new App Spaces from App Switcher interface.

iOS 11 Slide Over on iPad

How to Add Second App From Dock

Step #1: Bring up Dock by swiping up from the bottom of screen.

Step #2: To initiate multitasking mode, simply tap and drag on an app in Dock.

Step #3: Next, you need to drag the app out of the Dock to Screen.

If the app you want to use is not on Dock, you can add it from Home screen.

Step #1: Come back to Home screen by pressing Home button.

Step #2: Now initiate multitasking by tapping and dragging an app on Home screen.

Step #3: When you drag the app, use your second finger to tap other app you want to open/use. Note: If the other app is on another Home screen, you can swipe and drag while dragging the first app.

Step #1: Bring down Notifications shade by swiping down from top of your iPad screen.

Step #2: Next, swipe right on screen to invoke Today view.

Step #3: Enter the name of app in search box.

When the app appears on screen, drag the icon of app from search results and drop the same over the current app.

Using Bluetooth keyboard on iPad? Simply press Command + Space to initiate Spotlight, and then enter the name of the app you want to use. Now drag the app down to the main screen by following the methods available.

How to Use Slide Over in iOS 11

How to Initiate Slide Over in iOS 11

Step #1: You can invoke Slide Over by dragging the app to center of the screen.

Step #2: Release the drag. Slide Over will automatically position on the right side of your iPad screen.

How to Change the Position of Slide Over App

How to Turn a Slide Over Pane to Split View

Step #1: Drag your Slide Over window either on Left or Right side of the screen.

Step #2: Now swipe down over the Slide Over pane’s Edit area from the top of the screen. Keep your fingers there until you see the main app pane, which leaves a black space. Next, release the drag.

How to Swap Out Apps in Slide Over

Slide Over automatically removes the existing app when you add a new app icon to the screen from Dock or Home screen.

How to Remove Slide Over

You can remove Slide Over by swiping right on the pane.

How to Display Three apps on Screen at Once

You can introduce third apps on your iPad screen if you really want to improve your productivity by multitasking.

When you drag an app on the already opened apps, this new app will replace the existing one. Be careful here!

This newly added third app is added as your Slide Over panel.

How to Use Split View in iOS 11

How to Initiate Split View in iOS 11

Step #1: Split View can be invoked by dragging the app to the extreme left or right of your iPad screen.

Step #2: Do not release the drag until you see the main app pane appears, leaving a black space.

How to Resize and Reposition Apps in Split View

Simply drag that vertical Edit handle to the middle of your iPad’s screen.

Next, you can swap panes; for this, you need to go back to the Slide Over from Split View. Bring down the Edit handle from the top and then move Slide Over pane to the left of the screen.

How to Turn Split View Pane into a Slide Over Pane

Step #2: Next, you need to swipe down on the Split View’s Edit handle from the top of your iPad’s screen; release the drag when you see that the maximum screen area is covered by main app.

How to Change Apps in Split View

Step #1: Tap and hold new app from the Dock of Home screen.

Step #2: Now drag the app on top of the app you want to change.

This will darken the pane faintly.

How to Remove Split View Pane

Step #1: Tap and hold vertical Edit handle from the middle of the screen.

Step #2: Then drag left or right to the extreme side of the screen to close Split View pane.

How to Close Both Split View Panes Simultaneously

It is super simple! Just double tap the Home button to invoke App Switcher. And then swipe up the Split View App Space to close it.

Check this guide if Slide Over and Split View not working in iOS 11 on iPad.

Multitasking surely improves productivity if you are using your iPad Pro for business purpose. You can explore above features and share your feedback with us on Facebook, Twitter and Google Plus.