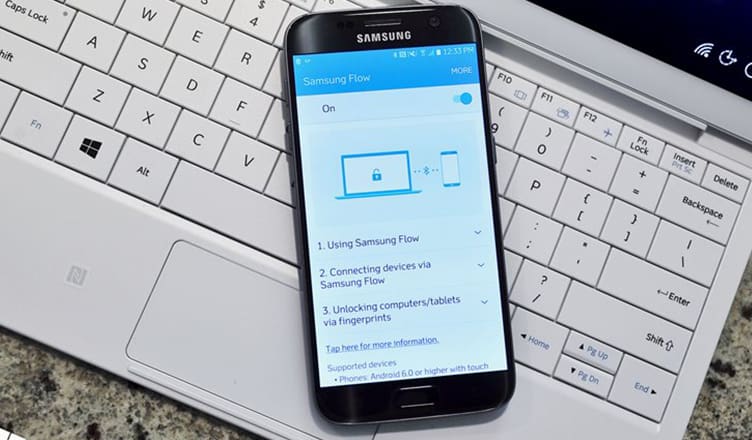 Probably the idea of Continuity is first nicely executed by Hollywood studios by launching sequels of popular movies. But tech giant like Apple has elevated the feature to perfection. You can start a project on your Mac; in the middle, add some colour with an iPad Pro; and then you can send it as attachment from your iPhone. The complete cycle smoothly runs on your iOS devices. And now it’s time to send a fitting answer to Apple from Android. Samsung has come up with a perfect solution you can unlock Windows PC using Samsung smartphone.

If your Samsung phone is running Android Marshmallow, you can unlock Windows 10 PC with Android Phone. Samsung Flow was introduced a couple of years back; but this app was compatible only with Samsung Galaxy Tab Pro S. In March this year, Samsung has updated this app and now it works well with all Galaxy smartphones running Marshmallow or later Android versions. If you want to use Galaxy tablet, it should be running on Nougat or higher version. Once you download Samsung Flow on your phone, it works with any Windows 10 computer.

Apart from Marshmallow and Nougat versions, you need Bluetooth and Windows Hello.

Step #1: First off, download Samsung Flow on your Samsung phone and Windows 10 computer.

Step #2: Next, open Samsung Flow on your Windows 10 computer and Samsung phone.

Step #3: In your Windows computer, choose your phone and click on Pair button.

Step #4: On both devices, you will be prompted to enter passcode; once you enter the passcode, Bluetooth pairing will be completed.

Step #5: Now you need to click on Register Device button.

Step #6: Again you have to confirm passcode on both devices to complete registration.

Step #7: Type in your PIN and then scan your fingerprint

If you want to avoid the use of fingerprint, you can go for Simple Unlock as an alternative. Go to Samsung Flow → Settings → Turn ON “Simple Unlock”.

Samsung Flow shows a multitasking personality; you can easily log into your PC with a fingerprint scanner of your smartphone. In addition to this, transferring content and tasks from your phone to the computer is a breeze. You can check text messages you have received on phone on your computer. A glaring feature of Samsung Flow is the comfort to auto-enable hotspot on your Samsung smartphone. This will help you dodge your dependency on Wi-Fi network.

Almost all Apple users present one reason for not switching to Android: they are not able to move effortlessly from iOS to Android. Mostly, iMessage is cited as chief reason why Apple users are not ready to move to Android.

But things have changed at Samsung factory. Following the latest update in Samsung Flow, you need to relook at the whole gamut of transition from Apple to Android. Though it is still impossible to mirror a default SMS app on a Windows computer screen, nobody can challenge the fact that Samsung is the largest Android OEM in the world, and Windows is the most popular system for desktop and laptop comps.

In the end, everything depends on the smooth and effortless transition offered by Samsung Flow. Let us hope this cross-platform device connection wins the hearts of Windows and Android customers (in other words, they should not think of moving to iOS and macOS platforms). But poaching users from iOS is still a far cry!

Samsung has still miles to go to beat its arch rival. Some of the features users like to explore on Apple devices do not need a third-party app. For example, you can easily unlock MacBook Air/Pro using your Apple Watch.

If there is any third-party device intervenes in locking or unlocking Mac, it is a USB drive. Yes, you can lock or unlock Mac or PC using USB drive.

Those who don’t have Apple Watch and want to turn on their Mac or Windows PC can use Alexa. You can use apps like Tasker and IFTTT to use Alexa to turn on Windows PC and Mac.

Android can boast of one feature that is not available in iOS devices. Fitbit users can unlock Android phone with their fitness tracking device. This feature saves your efforts to remember passcode/pattern/password that you need to enter at least 100 times in a day.