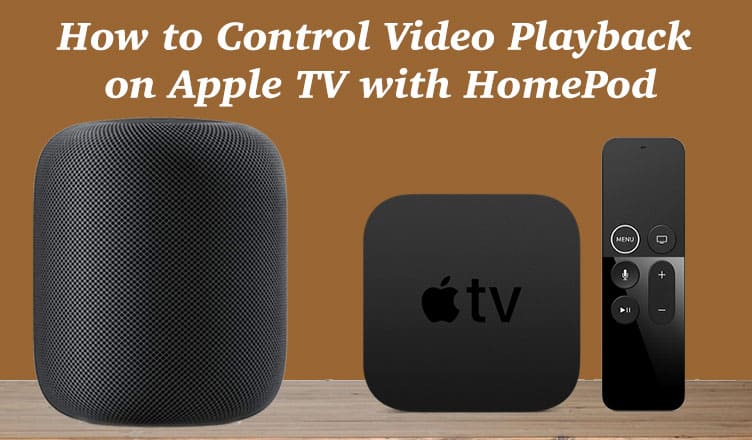 HomePod works with an Apple TV and this is big news for any Apple TV user, who has been using either keyboard or Siri remote to control playback and other things on his/her smart TV. Now you can control video playback on Apple TV with your HomePod.

Note that there are a limited number of Siri commands you can use on your Apple TV with HomePod. For example, you can ask Siri to pause, play, skip ahead and skip back while you are watching your favorite movie or TV show on your Apple TV.

Apart from HomePod, you can always use your Home app to control Apple TV.

How to Control Video Playback on Apple TV Using HomePod

Use Siri commands to control video playback on Apple TV:

Once you have setup HomePod with an Apple TV, you can ask Siri to adjust audio play on Apple TV. You need to make sure that the movie, TV show or video is being played or paused on your Apple TV.

Not willing to use Siri to prompt playback? You can use your iOS devices to control video playback.

Step #1: Bring up Control Center by swiping up from the bottom on your iPhone 8 or earlier models. If you are using iPhone X, you need to swipe down from the top right corner.

Step #2: Either use 3D Touch or long press on the Now Playing panel in Control Center.

Step #4: Next, you can tap on Play/Pause button to play or pause the video.

Step #5: If you wish to skip the video ahead, tap on Skip ahead 15 seconds.

Step #7: Then you need to drag your finger across the slider bar to rub forward or backward to a different spot in the video.

You can also use these controls in the Music app on your iOS device; simply tap on Now Playing and then tap on AirPlay icon to bring AirPlay devices. You will have to follow the same steps once you choose your HomePod from the options.